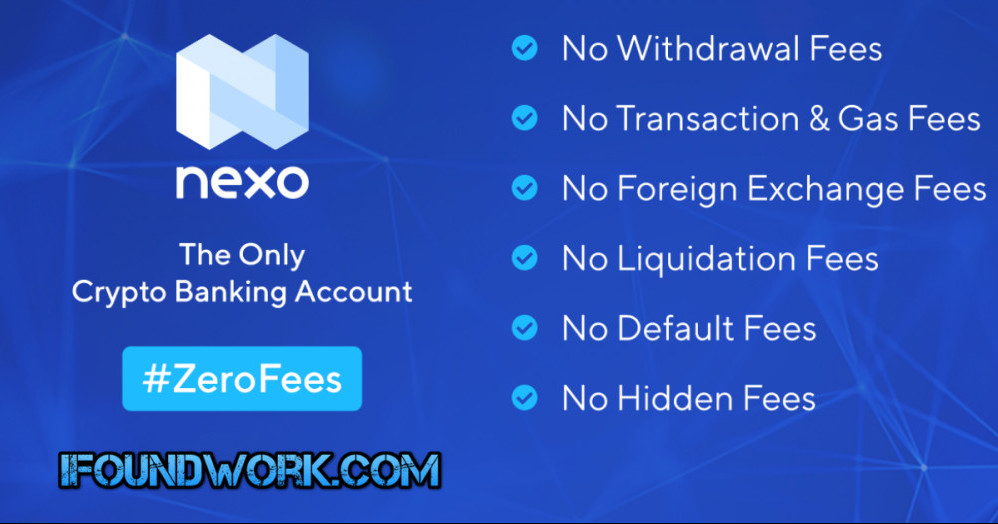 As cryptocurrencies continue to gain traction and more individuals start to consider investing in the space, major adoption is on the horizon as well as disruption to traditional finance. Until recent, investing in cryptocurrencies has been a daunting endeavor riddled with many instances of hacks, suspicion and complexity beyond the capabilities of most people. However, many innovative companies have started to streamline the process for new investors, bringing large volume and attention to the space throughout its development. While most platforms offer investors the opportunity to invest in cryptocurrency through debit cards and bank accounts, we have yet to see major platforms in which investors can take out loans in return for staking their cryptocurrency. Nexo has not only pioneered the idea but had the initiative to take it a step further. In a nontraditional sense, Nexo is initiating a process that not only rewards long term investment, but is solving many problems cryptocurrency investors face with overarching capability.

The process is simple, instant and straightforward. By depositing cryptocurrency into Nexo, the platform determines your credit limit. Nexo doesn’t conduct credit checks affecting your credit score, and provides your loan based on the size of your security deposit.

By utilizing a lucrative business model, crypto owners use their own holdings as collateral and still retain access to their investments. Nexo users then have the choice to withdraw cash in a multitude of fiat currencies such as US dollars, euros or pounds. While Nexo doesn’t follow the traditional method of offering loans, it should still be noted that Nexo will charge interest on your loans, but does so at a competitive rate. In addition, Nexo offers quite a clever incentive to its users, giving the option to repay loans with the Nexo token. If utilized, the Nexo token reduces a fixed rate of 11.9% APR down to 5.9%. With a fluid repayment system, you are still given the choice to repay your loans in any type of currency, not only the one you took the loan in. Preference of the Nexo token is much preferred due to the reduced APR, but the flexibility of the loan payment system greets users with an abundance of options. The Nexo token is backed by the assets in Nexo’s portfolio and is US-SEC compliant. Acting less volatile compared to other cryptocurrencies, NEXO has a relatively steady price history and the utility is undeniable.

Nexo currently supports over 10 cryptocurrencies that you may place as collateral, including BTC, ETH and EOS just to name a few. With a friendly user interface and a Loan to Value system, Nexo’s platform appeals to cryptocurrency HODLers as a nice alternative to asset disclosure. In addition, users can now have access to liquid funds while watching their investments grow. Stablecoins currently allow you to utilize the highest LTV ratio at 90%. With Bitcoin and Ethereum deposits offering 50% and other cryptocurrencies continuing lower, it should be understood that these ratios may be susceptible to variation in the future due to periods of volatility.

During periods of repayment, your initial security deposit will continue to be held on the Nexo platform. The true utility is for long term cryptocurrency investors that want their investments to grow but also have access to cash in times of necessity. Throughout periodic cycles of bull and bear markets, investors are often faced with difficult decisions about liquidating assets when they may need cash. Selling investments at a loss in desperate times is not only frustrating, but can impede your financial success if you don’t give your assets the proper amount of time to mature. As many of the barriers to financial success include inadequate time for growth, Nexo not only breaks down this barrier but incentives users to hold onto their investments instead of liquidating them. While traditional financial institutions only profit off you taking longer to repay your loans, Nexo’s ecosystem is mutualistic in benefit, eliminating the need of forced liquidation for its users. Not only is the process to receive your funds exceptionally fast, but while conventional methods can negatively impact your credit score, Nexo doesn’t vary its APR based on short term or long term requirements of the loan and is at a fixed rate with the amount proportionate to your security deposit.

LTV gives users the freedom to have access to liquid funds while still valuing the long-term growth of their investments. Given the possibility that your repayment period can occur during a bull run for your assets, you will still receive the same amount of cryptocurrency back, but can utilize a portion of your profit to pay off a portion of your loan. However, it is important to understand that given the volatility of cryptocurrency markets, this is still only a chance and the opposite scenario is possible as well. If you payback your loans in general, then you will be faced with no hidden fees, additional requirements and will be in the clear. However, if you neglect your payments and your assets go through a mass period of depreciation, Nexo will reach out and notify you of the current circumstances.

Not only will Nexo be forced to liquidate a portion of your security deposit as a loss, but it can tack on some hefty fees by using other exchanges at the user’s expense. Repayments whether a period of growth or depreciation will still accrue interest dependent on whether you utilize the Nexo token or not. But it should be noted that while the LTV can work in favor of the user during a repayment period, Nexo still retains the option to liquidate a portion of your portfolio to cover losses in the event that you neglect payments for an extended period of time.

The cryptocurrency industry is riddled with scams and malicious individuals that continue to take advantage of users and fraudulently use their assets. Therefore, before any investment, it is imperative that you use your discretion and due diligence on any platform, exchange or website. Backed by custodianship and cold wallet storage, Nexo protects its users in the event of hacks, fraudulent activity or misplacement of private keys. Nexo uses BitGo to allocate user assets, and the platform is insured up to $100 million. With a verifiable history, Nexo was created by Credissimo, which has served users for over a decade in Europe. Giving out loans worth around $120 million, the foundation has amassed $155 million in cash and has solidified its position as a trustworthy FinTech market leader.

In addition to a Nexo credit card (coming soon) that gives direct access to funds and 5% cashback, you also can earn interest on deposits you make at Nexo. At 8% APY, Nexo gives you a unique but exciting feature to its users, by disregarding a time period you are required to hold your money on the platform and instead giving immediate access to funds. 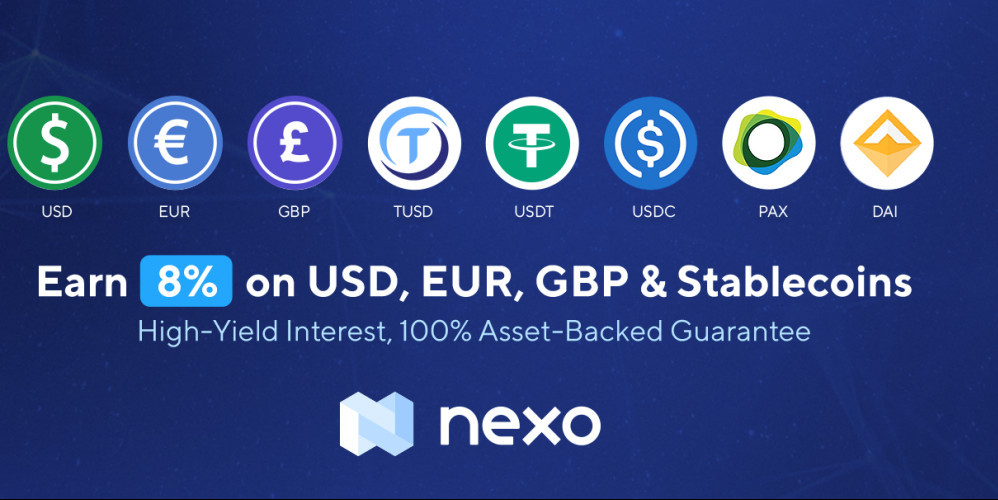 Protected by Lloyd’s of London insurance, the incentive requires that deposits be conducted in euros, but still retains a 100% asset-backed guarantee. In one of the most clever and appealing features, Nexo solves a major problem faced by all cryptocurrency investors. As of current, capital tax gains on cryptocurrency are extremely frustrating due to all the legislation and guidelines that lack clarity. By using the Nexo ecosystem, you are borrowing the asset against its value and therefore are not susceptible to capital tax gains.

Nexo offers immense benefits for long term investors as well as individuals new to the space. With a bright and appealing interface, Nexo is easy to use, straightforward and groundbreaking. But one should be aware that as this is a still relatively new industry, given the volatile nature of cryptocurrency and regulatory processes that are still underway, one must use caution when considering any platform or business that utilizes cryptocurrency. As with any early adopters, the risk and reward are incredibly high and is not for the faint of heart. That being said, Nexo has a large amount of support from the community and users alike. The impact at scale has already started to flourish and as the cryptocurrency industry continues to advance, Nexo and similar platforms will continue to set the standard for the future of finance.

Test it Out Here 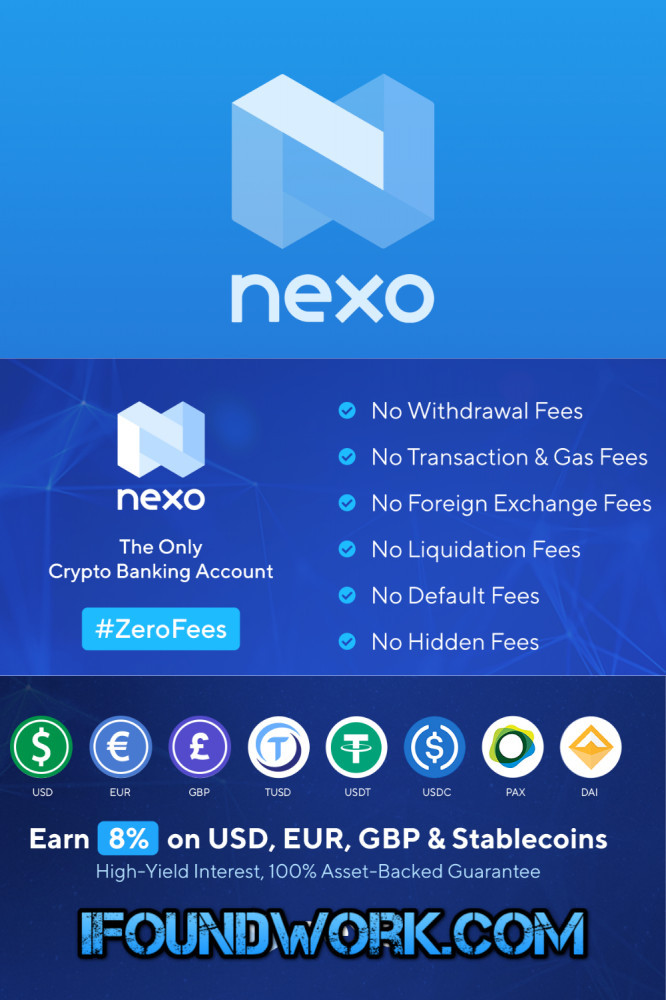 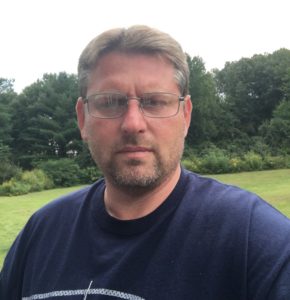 I am Paul St.Pierre a serial Entrepreneur. I have a passion for building businesses and helping people earn an income, save, and invest for themselves.